Hip-Hop, Commercialism and the Female Emcee

The following post was originally published by fellow emcee, AtLas’, in the forum section of HipHopSisters.com… 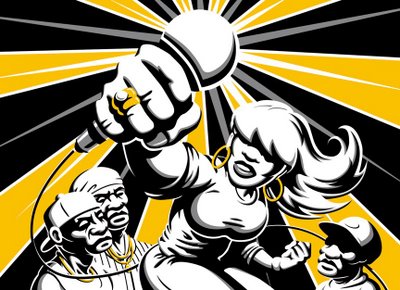 The rare and deadly female emcee

“Why is there a perceived lack of female emcees in Hip-Hop? People are always asking where the ladies are in Hip Hop. I happen to know of a few places where you can find us. However, when the question is posed, I have to wonder, do they only mean the female emcees? There doesn’t seem to be a lack of female dj’s or b-girls, so why emcees? I have my own thoughts, but I’m interested to know yours.”

In response to AtLas’ questions, I wrote the following elaborate reply. However, I chose not to publish it at HipHopSisters.com because I determined it to be inappropriately lengthy…

In response to your first question, asking why there is a “perceived” lack of female emcees in the game right now, especially when compared with DJs and B-Girls, the answer is complex. We must start, first, by realizing (and admitting) that today’s Hip-Hop music has been completely compromised by the corrupted Corporate oligarchy known as the “Music Industry.” In essence, Hip-Hop is a vehicle, driven by struggle, towards empowerment, using the fuel of expression. And, though the genre began underground, it was not until it was picked up by the mainstream that it became a worldwide sensation. And, as the gatekeepers of all radio play, and the holders of all major record labels, for many years, the Music Industry has usurped authority over the entire Hip-Hop music scene. Record executives have worked hard to convert the emcee into a “product,” to be sold in a commercially-driven market. The Industry has, in effect, removed most of the heart and soul from Hip-Hop music, and replaced it with the sort of shallow, fickle, fad-based, formula-dependent “pop” culture that draws teenyboppers to the market en mass, eager to purchase the latest, most popular album available. Where Hip-Hop once had substance, it now has image. The content and message of lyrics have taken a backseat to swag, flow and “a good beat.” Most of today’s radio emcees no longer represent the streets, or the struggle. Instead, they simply represent the Corporate interests of their record label masters. These types of sellout emcees – motivated primarily by money – serve as “useful idiots” to the Industry, because they are ready, willing and able to completely, hypocritically “brand” themselves to fans in order to increase sales. From where I stand, today’s mainstream Hip-Hop music more resembles a high school popularity contest than an actual form of art.

Personally, I think that many of the world’s more socially-, politically- and/or spiritually-conscious emcees feel they have little choice but to stay underground, where they will probably develop only a local fanbase, and usually remain obscure, never reaching a national or worldwide audience. They forget, however (or aren’t aware), that Hip-Hop music has its roots in the underground, and that the local scene is where it’s at! Emcees don’t need the Industry. On the contrary, the Industry needs emcees. Without them, it cannot stake a claim in Hip-Hop culture, and therefore, cannot profit from the movement, while also adulterating and ruining it.

The very idea of true Hip-Hop culture – organic, grassroots, uncentralized, and not-for-profit – serving as a form of expression for the underclass, and also for the Individual – is powerful, and an absolute threat to the mainstream, as well as the entire American Corporation-Nation. That is why the Music Industry, serving as just another extension of the powers-that-be, has hijacked Hip-Hop music. They have spent many years incrementally planting bought-and-payed-for traitor emcees into the game, so as to slowly saturate and pollute the airwaves with mindless, pop drivel, and dilute the true Hip-Hop music that we all love so dearly. And, this is not the first entire music genre that has been the target of Corporate sabotage, or a “hostile takeover.” Because of this, mainstream Hip-Hop does not currently reflect reality whatsoever. It is stagnant, self-insulated, one-dimensional, and parasitic – feeding off of our poverty, our discontentment with the system, our social impotence, and even our occasional feelings of hopelessness – in order to create & provide feel-good, fantasy-based nonsense and non-solutions to listeners. For the most part, commercial Hip-Hop just a circus act, geared towards peddling moral weaknesses to fans – especially the youth. It is no accident that it no longer uplifts or inspires – that it no longer shows love or strength – that it no longer bears truth, or chants down injustice, corruption & tyranny. Today’s mainstream Hip-Hop simply isn’t meant to empower the spirit of the Individual.

Therefore, even though there are many female emcees in the world right now, unless their lyrics are exclusively promoting promiscuity, glorifying prostitution, and/or pushing superficiality & vanity, they are currently of little or no use to the Industry. And, because most women with skills aren’t willing to compromise themselves, historically, there has always been a glaring lack of female emcee role models in the mainstream helping to inspire our young girls. Compared with their male counterparts, there’s only a handful of well-known female emcees in the Industry. Interestingly, when considering the fact that there are actually slightly more females in the world than males, statistically-speaking, mainstream Hip-Hop music, once again, does not even come close to reflecting the reality we all live in. This fact is indicative of some sort of social disease – not just afflicting Hip-Hop, but also, the world as a whole. As of today, our “progressive” society is still a male-dominated one, with an unequal share of men in controlling the fields of science, politics, and just about every other powerful, or decision-making group, or lobby. Unlike young boys, young girls do not see emceeing as much of an option, because they have not witnessed it as much of an option for other females! In this sense, many of our young girls, in an effort to “think realistically,” have opted out of even trying the art of emceeing. And, the parents of the world have done little to encourage their daughters to fight against this status quo. But, this is the reality of social conditioning…

The underlying psychology of our society is that of submission and groupthink. For fear of ridicule, appearing foolish, or “rocking the boat,” and even sometimes, in a misguided desire for acceptance, we are early taught to deny our own uniqueness and the limitless potential of our Individuality, and instead, embrace the familiar, seemingly-safe, already-proven comfort-zones of collectivism, conformism and tradition. And, those Individuals that choose to accept this school of thought, and submit their will to it, quickly begin to develop a deeply-vested interest in defending the ways of their newly-acquired system. They begin to accept the inherent flaws that define their single-minded version of society as “necessary evils,” learning to apologize for them, instead of working to correct them. The only way to truly overcome this vicious cycle of twisted doublethink logic is to truly think critically and allow pure reason to prevail. We must finally admit to ourselves that every single thing that was ever discovered, created or learned in this entire world, no matter how commonplace it has now become, began when one person exercised Individuality – by doing something their own way, doing something differently, or trying something altogether new!

In response to your second question, asking whether the individuals who wonder where the ladies are in Hip-Hop are referring only to female emcees. From my experience, I have notice that the vast majority of them are. And, I have a few ideas as to the reasons why. In terms of artistic mediums, regardless of the actual numbers involved, out of the Hip-Hop elements you mentioned, emcees typically stand out most, because of the way in which they give themselves to their audience. Emcees use the powerful medium of voice, and combine it with the mneumonic devices of rhyme and melody. This gives them the unique opportunity to introduce entire crowds of listeners to their very own personal experiences, thoughts and ideas in a very memorable way. And, because of this, fans often feel like they “know” their favorite emcee personally, or that the artist is speaking to them directly, in the same way that fans of rock music are drawn to the “lead singer” of a band.

Don’t get me wrong – no element of Hip-Hop is superior to the others – they are all equal and necessary. For the most part, emcees just happen to connect with their fans on a more personal, intimate level than artists involved in the other elements of Hip-Hop, and in doing so, gain the most attention and focus – from the underground, the Music Industry, and fans, alike. Emcees are, in many ways, the frontline spokesmen/spokeswomen of Hip-Hop culture, especially in the mainstream. For many fans (though, not all, of course!), the emcee serves as the gateway into their embrace of Hip-Hop. For these fans,the other elements of Hip-Hop are discovered later (if they even do at all). These same fans are usually exposed to Hip-Hop culture through the mainstream first – and, too many never stray from this original path. To them, the underground scene doesn’t exist, and they have no idea of the many female emcees, conscious emcees, poetic emcees, battle emcees, freestyle emcees, etc. who are out there making real Hip-Hop everyday. To rephrase my first statement: individuals who ask where the ladies are in Hip-Hop are primarily fans of commercial Hip-Hop music, where emcees rule, and there definitely is a “perceived absence” of female emcees. Those in the know about the numerous female emcees that exist in the underground circuit are more likely to ask the question, “Why are female emcees still not receiving the support of the music industry, even though they have proved themselves as contenders time and time again?”

One Response to Hip-Hop, Commercialism and the Female Emcee