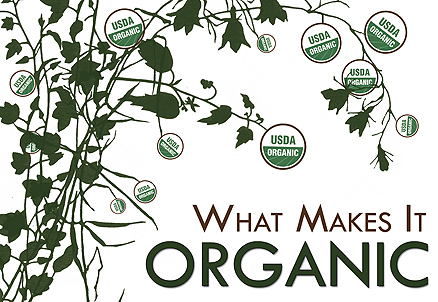 “What Makes it Organic?”

The Spin Behind The “No Health Benefits To Organic Food” Scam:
http://www.postpeakpublishing.com/?p=120

According to the UK’s Food Standards Agency, and as gleefully reported today by the BBC, ‘Organic has no health benefits’, so we can all breath a sigh of relief and return to eating pesticide and chemical filled garbage. There’s probably no health benefits to unleaded paint then, eh? Any benefits left in quitting smoking? Do we even need to debunk this utter foolishness? Personally, I wouldn’t expect an organic pepper to have significantly more nutrients than any other pepper, since they are usually not genetically engineered, though nutrient levels were the only factor in the study’s determinations. Turns out organic peppers do indeed have elevated nutrient levels, but not significantly elevated, according to the FSA. The health benefits of not ingesting a host of ingredients far too dangerous to be included in a child’s chemistry set is a glaring omission

My Commentary: Discover the TRUTH behind the latest BLATANTLY MISLEADING PROPAGANDA-PIECES AGAINST ORGANIC FOOD, brought to you by the mainstream media, on behalf of the UK’s Food Standards Agency (which, in a glaring CONFLICT OF INTEREST, is FUNDED by the FOOD INDUSTRY).

PEOPLE DON’T EAT ORGANIC FOOD BECAUSE IT CONTAINS MORE NUTRIENTS! THEY EAT IT BECAUSE IT HASN’T BEEN ADULTERATED WITH TOXIC CHEMICAL FERTILIZERS, PESTICIDES, ANTIBIOTICS & HORMONES!

EVIL CORPORATIONS that rely on INDUSTRIAL AGRICULTURE ARE IN A SWEAT!!! They have taken note that the Western World is slowly waking up to the fact that FACTORY FARMS are UNNATURAL, WASTEFUL & POISONOUS TO THE ENVIRONMENT! More & more people are seeking out food that is PURE – the way NATURE INTENDED IT!

Do you think that this growing trend in healthy eating will stop these CORPORATIONS from engaging in their SELFISH, ENVIRONMENTALLY SHORT-SIGHTED PRACTICES, BASED SOLELY IN PROFIT? HELL NO! Instead, they will simply engage in efforts to POLITICALLY-ASSASSINATE their COMPETITION!